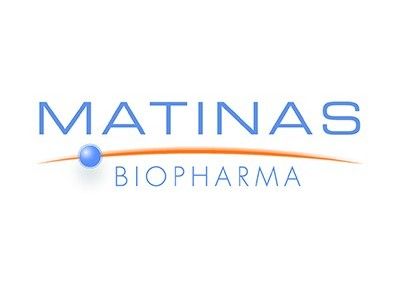 “In the third quarter, our team worked with leading key opinion leaders and our clinical and regulatory advisors to analyze in great detail a compilation of very encouraging preclinical and clinical data generated for MAT2003. Patients undergoing treatment for acute lymphoblastic leukemia (ALL), a blood-borne cancer, are at high risk for invasive fungal infections (IFIs) due to their specific chemotherapy. The profile of MAT2203 uniquely positions it to significantly reduce the occurrence of potentially lethal IFIs in these patients. We believe the compelling MAT2203 data package, combined with the proposed clinical and regulatory pathway we have established, positions us to successfully engage with the FDA to move our MAT2203 clinical development program forward to a pivotal Phase 3 registration study for the prevention of IFIs,” stated Roelof Rongen, Chief Executive Officer of Matinas. “Our team continues to work diligently to establish a clear path forward for our development programs as we complete the remainder of 2017 and work towards creating significant value-driving events throughout 2018.”

MAT2203 is an orally-administered, encochleated formulation of amphotericin B (a broad spectrum fungicidal agent). Little to no clinical resistance has been reported to date with amphotericin B as compared to the rapidly emerging drug resistance seen in other antifungal therapies. Currently, IV-only administered amphotericin B is the only broad spectrum fungicidal available but its IV-delivery results in significant treatment-limiting side effects, including nephrotoxicity. The ability to provide amphotericin B orally using our proprietary and novel oral formulation may offer a new and promising alternative for patients and doctors. The FDA has designated MAT2203 as a Qualified Infectious Disease Product (QIDP) for the treatment of invasive candidiasis and the treatment of aspergillosis, as well as for the prevention of invasive fungal infections due to immunosuppressive therapy. MAT2203 is also being explored for treatment of additional anti-fungal indications and may have the potential for Orphan Drug Designation in certain of these indications.

MAT2501 is an orally-administered, encochleated formulation of the broad spectrum IV-only aminoglycoside antibiotic agent amikacin, which utilizes the Company’s proprietary, lipid-crystal, nanoparticle delivery technology. Amikacin is currently used to treat different types of chronic and acute bacterial infections, including non-tuberculous mycobacterium (NTM) infections and various multidrug-resistant gram-negative bacterial infections. IV-administered amikacin is associated with major side effects including nephrotoxicity and ototoxicity (permanent loss of hearing). MAT2501 is specifically designed to provide targeted delivery of the potent antibiotic amikacin while providing a significantly improved safety and tolerability profile. In preclinical studies MAT2501 demonstrated efficacy after oral bioavailability and targeted delivery of amikacin directly to the site of infection in murine models of both pulmonary (lung) and disseminated NTM infections. The FDA has designated MAT2501 as a QIDP and an Orphan Drug for the treatment of NTM infections. The Company intends to initially develop MAT2501 for the treatment of NTM infections and is also exploring the development of MAT2501 for the treatment of a multi-drug resistant, gram negative bacterial infections. If approved, Matinas believes MAT2501 would become the first orally bioavailable aminoglycoside and represent a significant improvement over existing therapies from a treatment and health economic perspective.