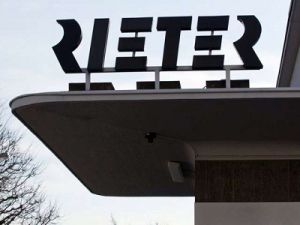 OREANDA-NEWS. The 2016 financial year was characterized by a significantly higher order intake, especially in the first half year, and lower sales compared to the previous year. Despite the decline in sales, Rieter achieved an EBIT margin of 6%. Against the background of the solid financial and earnings position, the Board of Directors proposes to the shareholders to increase the dividend compared to the previous year.

In the full year, order intake rose by 13% year-on-year to CHF 905.2 million. In the first half of 2016, orders were at a good level of CHF 510.7 million, mainly driven by solid demand from Turkey. In the second half of the year, the dynamism in Turkey and India slowed significantly due to increasing political uncertainties, with the result that orders declined to CHF 394.5 million.

Sales decreased to CHF 945.0 million, mainly due to the sluggish demand for machinery and systems in the second half of 2015. The market volume of CHF 3.2 billion in 2016 was roughly 8% down on the previous year. Thanks to its global positioning and attractive service portfolio, Rieter succeeded in achieving a market share of around 29% (30% in 2015).

Sales by region
Both in China and India, Rieter significantly increased sales in the year under review, by 33% to CHF 186.5 million and by 28% to CHF 182.1 million, respectively. In the other Asian countries, sales declined by 12%, but remained at a good level of CHF 286.3 million. In North and South America, following the completion of deliveries of large orders in the previous year, sales declined to CHF 86.6 million (CHF 200.6 million in 2015). In Turkey, a large portion of the good order intake from the first half year was delivered on schedule by the end of the year. Despite this, sales in Turkey fell to CHF 119.4 million, a reduction of 17% compared to the previous year. In Europe, sales decreased to CHF 40.9 million (CHF 60.2 million in 2015), due to the disposal of the Schaltag group in July 2015.

Improvement program STEP UP
Rieter made significant progress towards the implementation of the STEP UP program. Rieter had launched the program in 2014 to strengthen innovative power, expand the after-sales business and optimize the cost base.

Rieter presented an important innovation in 2016 with the new single-head drawframe generation RSB-D 50. This machine offers unprecedented productivity with the highest quality. Rieter’s UPtime Maintenance Solution, an online expert training system for monitoring and optimizing maintenance in the spinning mill, represents a further step towards the digitalization of the spinning industry. Research and development expenditure increased to CHF 48.0 million (CHF 46.6 million in 2015).

The measures launched in 2015 to reorganize production and sustainably increase profitability are almost completed at the Winterthur location. As announced at the beginning of 2017, Rieter plans to relocate production from the Ingolstadt site in Germany to the Usti site in the Czech Republic.

Winterthur location
Rieter intends to create a modern location in Winterthur, concentrating the customer center, product and technology development, assembly and administration on an area of approximately 30,000 square meters. The necessary planning process is under way. In a later phase, work will begin on developing the remaining area of around 70,000 square meters.

Dividends and dividend policy
The Board of Directors will propose to the Annual General Meeting on April 5, 2017, that the dividend be increased from CHF 4.50 in the previous year to CHF 5.00 per share. Rieter seeks a distribution rate of at least 40% of earnings.

As announced in February 2017, Werner Strasser intends to retire at his own request. On April 6, Serge Entleitner, as a member of the Group Executive Committee, assumes responsibility for the Components Business Group. Werner Strasser began his career at Rieter in 1994 and was appointed a member of the Group Executive Committee in 2011. The Board of Directors would like to express its heart felt gratitude to Werner Strasser for his extraordinary contribution to the development of the components business and the Rieter Group.

Board of Directors and Annual General Meeting
At the annual general meeting held on April 6, 2016, shareholders approved all motions proposed by the Board of Directors. They elected two new members to the Board of Directors, Roger Baillod and Bernhard Jucker. Erwin Stoller, Chairman of the Board of Directors, and Michael Pieper, This E. Schneider, Hans-Peter Schwald and Peter Spuhler, directors, were each confirmed for a further one-year term of office. This E. Schneider, Hans-Peter Schwald and Erwin Stoller, the members of the Remuneration Committee who were standing for election, were also each re-elected for a one-year term of office. Jakob Baer and Dieter Sp?lti were no longer available for re-election and were discharged by the Chairman of the Board of Directors with grateful thanks. In addition, the authorized capital was extended to a maximum of CHF 2.5 million or 500,000 shares for two years. The authorized capital gives Rieter greater flexibility to exploit strategic opportunities without delay.

Erwin Stoller has decided not to offer himself for re-election at the 2017 General Meeting. In the almost 40 years of his affiliation with the Rieter Group, he shaped and formed the company for many years and rendered great service to the Rieter Group. During this time, he held various executive positions, including as Executive Chairman from 2009 to 2013, and as Chairman of the Board since 2008. The Board of Directors would like to express its heartfelt thanks to Erwin Stoller for his outstanding achievements in the management and development of the company and for his exemplary commitment to the well-being of Rieter.

About Rieter
Rieter is the world's leading supplier of systems for short-staple fiber spinning. Based in Winterthur (Switzerland), the company develops and manufactures machinery, systems and components used to convert natural and manmade fibers and their blends into yarns. Rieter is the only supplier worldwide to cover spinning preparation processes as well as all four end spinning processes currently established on the market. With 15 manufacturing locations in nine countries, the company employs a global workforce of some 5 022, about 20% of whom are based in Switzerland.

1 According to proposal of the Board of Directors.
2 Shareholders’ equity (group) attributable to shareholders of Rieter Holding Ltd. per share outstanding at December 31.