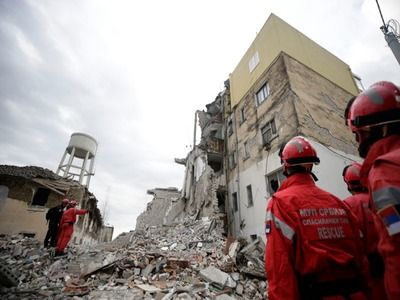 Albania Will Receive More Than € 1 Billion to Recover from Earthquake

State financeFinancesFinance accounting and auditIncidents
OREANDA-NEWS. Participants in the international donor conference in Brussels raised over € 1 billion in assistance to Albania to overcome the effects of the earthquake that occurred in the country last November. This was announced on Monday by the head of the European Commission (EC) Ursula von der Leyen following the results of the conference held in Brussels.

"Good news for the people of Albania - we exceeded our target for restoring Albania and reached € 1.15 billion, including a contribution of the European Union of € 400 million", she said. An international donor conference for Albania was held in Brussels on Monday, which was attended by EU member states, Western Balkans, as well as international organizations, including the UN and the World Bank.

Recall that on the night of November 26, 2019, an earthquake of magnitude 6.4 occurred in Albania. It claimed the lives of 51 people. About two thousand people received various injuries. As a result of a natural disaster, about 5.5 thousand housing units were completely destroyed.
Source: OREANDA-NEWS
Материалы по теме: