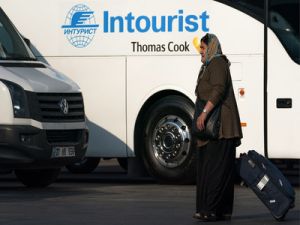 OREANDA-NEWS. The Chinese Fosun Tourism Group plans to buy out the tourism division of the British company Thomas Cook for £ 750 million (about $ 940 million). This is reported on the website of Thomas Cook Group. Fosun is already one of the major shareholders of Thomas Cook - it owns 18% of the company's securities.

Under the terms of the deal with Fosun, the Chinese company will receive a controlling stake in the tourism division of Thomas Cook, as well as a minority stake in subsidiary airline. The reorganization with the participation of Fosun will also attract wealthy Chinese tourists, the parties to the deal are counting on. Other shareholders of the company will be able to take part in the reorganization if they decide to further invest in the business of Thomas Cook with Fosun on terms to be discussed, the report says.

The sale of a significant part of Thomas Cook's business to a Chinese company is a necessary measure: according to Bloomberg, Thomas Cooks debt was about £ 1.9 billion as of March 31, 2019. British company profits continue to fall amid intense competition in the European tourism market: pre-sales of group tours this summer decreased by 9%, and pre-sale tickets - by 3%, and the company said it expects a decrease in operating profit in the second half of the year. According to the company, 75% of the tours are sold out for the summer of 2019.

The deal will provide sufficient liquidity for trading during the 2019/20 winter season and financial flexibility for investing in a business, Thomas Cook said in a statement. The plans of the Chinese company to buy travel company Thomas Cook in early June became known to the media. According to the channel, if the deal goes through, Thomas Cook will be the most significant acquisition for the Chinese market today. The deal won't include the airline of the same name, as Fosun can't acquire it by European rules.