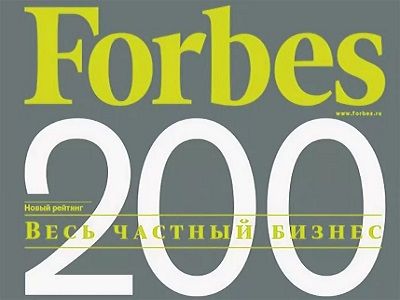 Forbes Published a Rating of the Largest Private Companies in Russia

OREANDA-NEWS The Russian edition of Forbes magazine published on Thursday the rating of the largest private companies.

The rating was headed by LUKOIL, which earned 5.48 trillion rubles in 2017. The staff of the oil and gas company consists of 103.6 thousand people.

X5 Retail Group, which owns Perekrestok, Pyaterochka and Karusel networks, rose to the second place with an annual revenue of about 1.3 trillion rubles.

In third place is "Surgutneftegas"with revenues of more than 1.1 trillion rubles for 2017. The company employs almost 114 thousand people.

According to Forbes, the total ruble revenue of 200 private companies for the year increased by 12% to 36 trillion rubles. At the same time, inflation in Russia at the end of 2017 amounted to a record low of 2.5%, and the ruble strengthened significantly — the average rate for 2017 was 58.3 rubles per dollar, and in 2016 — 66.8 rubles. The biggest growth (an average of 42.8%) showed the coal company — prices are all over the world in 2017 went up. In second place with an average growth of 30.7% were builders.

The largest employer among private companies in Russia in the rating of this year was "Magnet", which has 276 thousand employees. The second permanent leader in the ranking of employers since 2015 - X5 Retail Group, which employs 250 thousand people. Three leaders closes "Surgutneftegas" with 113.5 thousand employees, noted in Forbes.

In 2017, Forbes named Magnet the second largest private company, and X5 Retail Group was in third place. "Surgutneftegas", in turn, took the fourth place in the rating.

The information provided by the companies is taken as a basis for revenue estimation. The data of FNS of Russia and Rosstat presented in the SPARK system are also used.