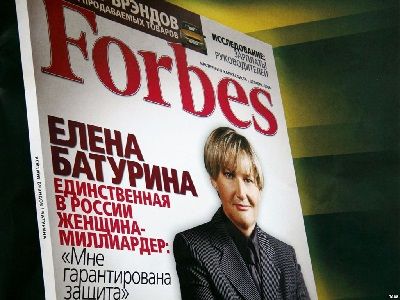 Forbes Published the List of the Richest Women in Russia

OREANDA-NEWS  Russian Forbes published the annual ranking of the richest women in Russia. The combined wealth of 25 participants exceeded $9 billion. The Richest woman in Russia, according to the magazine, for the sixth consecutive year was Elena Baturina, wife of former Moscow mayor Yuri Luzhkov.

In 2018, Forbes estimated its state of $ 1.2 billion, which is $200 million higher than last year's estimate. In the ranking of the richest Russian entrepreneurs according to the magazine, she takes 79th position. In second place was the founder of Wildberries Tatiana Bakalchuk, her fortune magazine estimated at $ 600 million. Third place magazine gave Elena Rybolovleva, who received a fortune of $600 million after a divorce from Dmitry Rybolovlev.

This year the rating includes several newcomers, one of which was the shareholder of the holding En+ wife of Oleg Deripaska — Polina Deripaska, who took 22nd place. Forbes estimated her fortune at $200 million. In 2018 she also debuted in the ranking of the richest businessmen of Russia according to Forbes, taking the 189 position. In addition to her rating for the first time included Lilia Rotenberg ($500 million), Lydia Mikhailova ($180 million) and Irina Gerasimenko ($180 million).

Rotenberg is the daughter of billionaire Arkady Rotenberg. In April, she became the owner of a 33% stake in TPS Real Estate, which manages six shopping malls. Previously, this share was owned by her father, then her brother-Igor Rotenberg. Mikhailova-wife of the founder of Cherkizovo Group Igor Babayev, she owns 75% of the family company, which, in turn, owns more than 80% of the shares of meat processing holding. Gerasimenko is the wife of Oleg Kozhemyako, acting Governor of Primorye. Before moving to the civil service, he was engaged in fishing business, and she became a shareholder of the company "Transfiguration base trawl fleet", reminds the publication.

The Ruble Exchange Rate has Risen Sharply After the Completion of the Exercises in the South of RussiaOreanda.ru | 22.04.2021 15:14:29