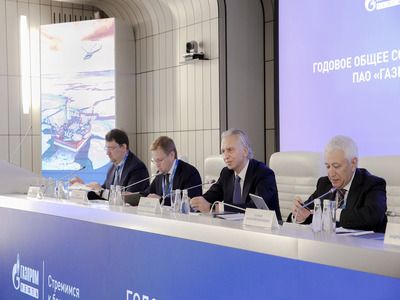 FinancesgasFinance accounting and auditStock market
OREANDA-NEWS.In 2019, Gazprom Neft increased its IFRS net profit attributable to shareholders by 6.2% compared to 2018 to 400.2 billion rubles, the company’s report said. Revenues for the reporting period decreased by 0.2% and amounted to about 2.5 trillion rubles.

The adjusted EBITDA remained at the level of 795.1 billion rubles, despite the negative dynamics of prices and market conditions, the company noted. Hydrocarbon production increased by 3.5% compared to 2018 - up to 96.1 million tons of oil equivalent.

The growth occurred "due to increased production at the Novoportovskoye and Vostochno-Messoyakhskoye fields, in the Orenburg region and oil rim projects, as well as due to an increase in the group's ownership in Arcticgas. Oil and condensate production during the reporting period increased by 0.5% to 63.3 million tons.

Gas production increased by 9.8% to 40.85 billion cubic meters. The company explains the dynamics of the launch of the second phase of integrated gas treatment units at the Novoportovskoye field, the commissioning of a gas compressor station in the Orenburg region, as well as the increase in natural gas production at the Arktikgaz fields. Gazprom Neft’s hydrocarbon production expenses increased by 4.1% in 2019 and reached $ 3.78 per barrel of oil equivalent.
Source: OREANDA-NEWS
Материалы по теме: