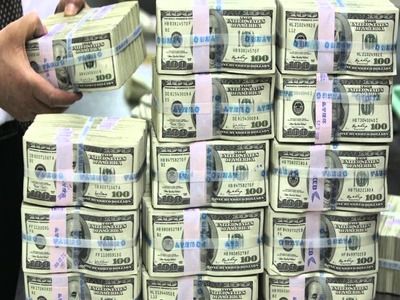 Media: Cash Reserves of Russian Public Sector in 2018 Increased by a Record Amount of $ 56 Billion

FinancesState financeFinance accounting and auditMinistries and departments
OREANDA-NEWS. Cash reserves of the Russian public sector in 2018 increased by $ 56 billion or 3.87 trillion rubles, which is 10 times more than in 2017. This was reported on Tuesday by the Russian business media, citing data from Rosstat and the Central Bank.

"The volume of cash currency and cash on deposits in the general government in 2018 grew by a record 3.87 trillion rubles, which is equivalent to $ 56 billion at the end of last year, follows from the data of Rosstat on national accounts for 2018", the publication said. The currency and government deposits increased by 380 billion rubles a year earlier, that is, in 2018, the amount increased tenfold.

Such an increase in government deposits is a record for the entire publication of these statistics since 2012. So, last year, the state saved up almost as much money as the entire banking system (3.9 trillion rubles), the newspaper notes. "The growing" money cushion "of the state is the result, first and foremost, of a conservative budget policy, in which about 40% of oil and gas revenues aren't spent, but go into the money", writes the Russian media.

According to the publication, such an increase may be the reason that last year the total federal budget reserves on accounts in the treasury reached a record, having increased by 4 trillion rubles compared to the end of 2017, to 10.2 trillion rubles. This happened due to the purchase of foreign currency by the Russian Ministry, in accordance with the budget rule for additional oil and gas revenues. In 2018, the Ministry of Finance purchased currencies worth 4.1 trillion rubles, and in 2019 it was credited to the National Welfare Fund.

Currency purchases into reserves continue this year, due to the magnitude of the price of Russian oil over other offers on the market ($ 65.3 per barrel in January-July versus $ 41.6). From January to July, nearly 1.9 trillion rubles were allocated for these purposes.