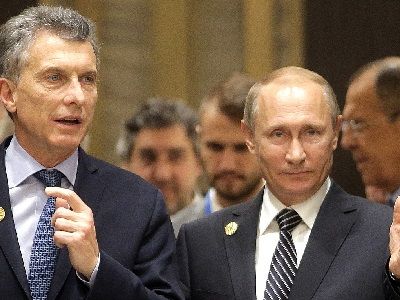 Putin and Makri Discussed the Possibility of Payments in National Currencies

OREANDA-NEWS Russian and Argentine presidents Vladimir Putin and Mauricio Macri discussed at the meeting within the G20 the possibility of switching to payments in national currencies and the arrival of the Russian Bank in this Latin American country, Russian Ambassador to Buenos Aires Dmitry Feoktistov told.

He said that Moscow offered its partners in Argentina to start mutual settlements in national currencies. As an example of good cooperation in this area, the Ambassador called a similar agreement between Argentina and China.

"There is a currency swap for $ 20 billion, there is a huge ICBC Bank — its building can be seen from anywhere in the city. The Chinese are actively working here, the yuan is one of the reserve currencies of Argentina. Why not do the same with the ruble? Why not come here to the Russian Bank, which would be able to serve, including and above all, these major projects through our various companies?"- said Feoktistov.

He stressed that " these issues were discussed including at a meeting of delegations headed by the presidents (December 1 in Buenos Aires-ed.)."

"We would be very interested to have a Russian Bank in Argentina, which would help our businessmen to carry out projects here," the Russian diplomat said.

However, the Ambassador explained that in Buenos Aires " do not yet understand to what extent the ruble is a fully convertible currency, what to do with rubles." "They do not reject this possibility, it will require additional analysis," said Feoktistov.

Earlier it was reported that Russian and British companies can switch to settlements in rubles and pounds sterling, abandoning the dollar, in case of political and economic need, the infrastructure for this exists.