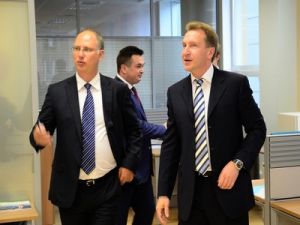 OREANDA-NEWS. The RDIF, the French sovereign fund Bpifrance and the Orpea Group company will invest up to € 200 million in creating a network of elderly care centers. A generation has appeared in Russia ready to pay for “a decent old age of parents,” experts say.

The Russian Direct Investment Fund, a division of the French sovereign fund Bpifrance International Capital and the Orpea Group, the company that operates rehabilitation centers for the elderly, agreed to create a network of rehabilitation centers in Russia, a source familiar with the project details. A corresponding agreement will be signed within the framework of the meeting of Russian President Vladimir Putin with the French business, which will be held on Thursday, April 18. The representative of the RDIF confirmed that the fund participates in the project with Orpea and Bpifrance.

The first joint tranche of the project was agreed at the level of € 200 million, says the media, but in the future the volume of investments may be increased. In the future, Middle East sovereign funds from among co-investors of the Russian fund can join the project. The funds will be used to build a rehabilitation center under the Clinea brand in the medical cluster at Skolkovo (Moscow’s mayor Sergei Sobyanin announced its appearance in early April; will open in 2022), as well as centers in Russian regions - the first tranche of investments involves opening 20–30 similar institutions. We consider the site in the central region in the south and the Far East, said the source.

According to Kirill Dmitriev, head of the RDIF, “by investing in the construction of modern multidisciplinary rehabilitation clinics, Fund, together with its partners, is contributing to the fulfillment of the goals stipulated by the National Healthcare project. “Orpea’s many years of experience in providing world-class medical services will also allow Russia to apply best practices and support further development of the care and rehabilitation industry,” he said.