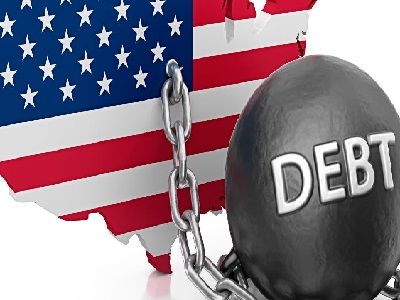 OREANDA-NEWS US public debt rose by more than $1.2 trillion in the 2018 fiscal year, which ended September 30, reaching a record high of $ 21.5 trillion. This was announced on Monday by the Washington Examiner.

As the newspaper notes, the US budget deficit by 2020 will reach $1 trillion, as it was during the first presidential term of Barack Obama.

The Washington Examiner emphasizes that in the 2018 fiscal year, the national debt took a little more than six months to grow from $20 trillion to $21 trillion. Conservatives in Congress say that government spending continues to remain unchecked and this could lead to even greater deficits in the next years.

According to the current legislation, the government can increase Federal loans indefinitely until March 1, 2019. After that, the so-called debt ceiling will work, which will not allow borrowing above the level of debt that has been reached by this date.

Earlier, US President Donald Trump said that the funds received from the US duties will be used to repay the country's public debt.

In mid-July, the Chairman of the Federal Reserve System (Fed) of the United States, which serves as the Central Bank, Jerome Powell said that the growth rate of the state sovereign debt of the United States exceeds the pace of development of the country's economy. In turn, according to the IMF, the US national debt will grow from 108% of GDP in 2017 to 117% of GDP in 2023.

The current US debt problems are a legacy of the acute financial and economic crisis of 2007-2008. Since then, the country has had to raise the debt ceiling several times, and every time political battles between Democrats and Republicans flare up.

Over the eight years of Barack Obama's presidency, the US national debt rose by more than $9 trillion and almost reached $ 20 trillion. American economists expect this figure to rise to $30 trillion by 2026. At the same time, the country's GDP is currently estimated at about $19.5 trillion.