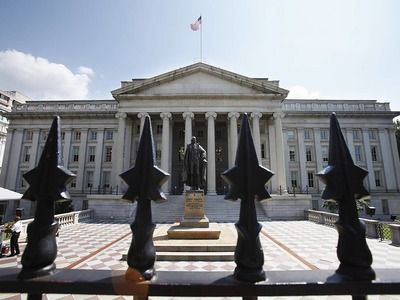 FinancesState financeMinistries and departmentsFinance accounting and audit
OREANDA-NEWS. Russia in September this year increased the number of investments in US government securities to $ 10.075 billion. The US Treasury Department cites such data. The share of long-term bonds amounted to $ 3.066 billion, and short-term - $ 7.009 billion.

In the spring of 2018, Russia began a sharp decline in investments in the US public debt. So, in April last year they decreased from $ 96 billion to $ 48.7 billion, and in May - to $ 14.9 billion. In August of this year, Russia for the first time since February increased its investments in US government securities to $ 9.3 billion. The largest holder of US government securities remains Japan with $ 1.14 trillion. In second place is China, the long-time leader with $ 1.1 trillion.

Recall that the size of US government debt set a new record, reaching $ 22.01 trillion. During the two years of Donald Trump's presidency, he grew by more than $ 2 trillion, and over the eight years of the reign of his predecessor, Barack Obama, almost doubled from $ 10.63 trillion.