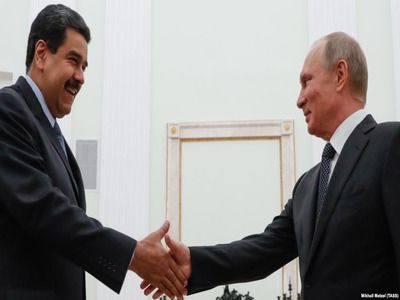 Venezuela Wants to Switch to Settlements with Russia in Rubles

FinancesCurrency marketInterstate relationsMilitary security
OREANDA-NEWS. Venezuela is negotiating with Russia to switch to settlements in rubles, the Venezuelan ambassador to the UN Geneva office, Jorge Valero, told the Russian media. Valero noted that Caracas is currently engaged in a dialogue with Moscow on the issue of switching to settlements in rubles. "Yes, we are now trying to conduct our operations through other currencies, including the Pedro cryptocurrency we have created," he said.

In Venezuela, the economic crisis has been continuing for a long time, aggravated by the financial and economic sanctions imposed against the country. US sanctions against Venezuela have been in effect since March 2015, when President Barack Obama introduced them against a number of Venezuelan officials in response to the expulsion of American diplomats from the country. Since then, the sanctions have been repeatedly extended. The United States recently tightened a number of sanctions against Venezuela, including against state-owned companies. Washington January 28 announced the introduction of sanctions against the national oil and gas company of Venezuela PDVSA.

Earlier it was reported about the construction of a plant for the production of Kalashnikov assault rifles in Venezuela, it is being carried out according to a schedule, installation work is being completed, Anatoly Punchuk, deputy director of the Federal Service for Military-Technical Cooperation, said in an interview with the Russian media.

"Construction of the facility is carried out in full cooperation with representatives of the foreign customer, as well as in accordance with the schedule agreed with the Venezuelan side. Installation is completed at the facility. At the same time, the blockade of the country, organized with the support of the United States and some states of the region , as well as the internal political situation in Venezuela "