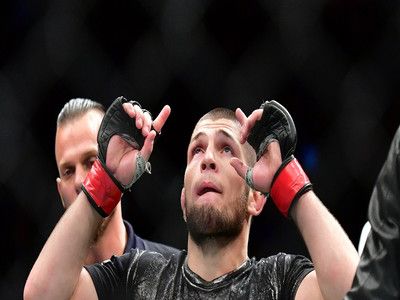 Ferguson Accused Nurmagomedov of Trying to Hide in Russia

Physical activitySportSport objectsEvents
OREANDA-NEWS. Mixed-style American fighter Tony Ferguson turned to the current UFC lightweight champion Habib Nurmagomedov via Twitter, saying that the Russian athlete is hiding from him in Russia. “April 18 Is Getting Close & You’re Hiding In Russia”, the fighter wrote.

The duel between Nurmagomedov and Ferguson is scheduled for April 18. Initially, the fight was supposed to take place in Brooklyn, but because of the coronavirus pandemic, the UFC leadership had to look for another place. According to the head of promotion Dana White, they have already decided on a new site, but he is not yet ready to share the details.

Currently, Nurmagomedov continues to prepare for the battle in Dagestan. The athlete’s father said that the US authorities do not allow a fight in the country. Prior to this, Nurmagomedov Sr. noted that he would like to see his son fight with Ferguson in Moscow.