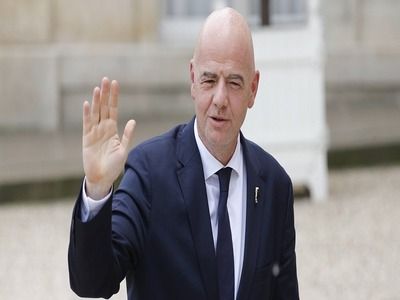 Physical activitySportSport objectsEvents
OREANDA-NEWS. The FIFA congress began in Paris. During his speech, the president of the organization, Gianni Infantino, in Russian thanked Russia for organizing and hosting the World Cup last year. “We want to thank Russia for organizing the tournament. Thank you, Russia”, the Russian sports newspaper quotes Infantino. FIFA President uttered the last sentence in Russian.

“There was talk that it was a country of violence and bureaucracy, but everything turned out completely different. There was a real holiday, because the world championship brings together worlds. And we want to say a huge thank you to Russia. Thank you for having so surprisingly organized the World Cup”, said Infantino. Recall that Gianni Infantino is the only candidate for re-election as president of FIFA. Elections will be held today, June 5th.

World Cup 2018 Infantino named the best in history. According to him, during the tournament, the whole world saw that Russia was not a country of violence and bureaucracy, as the media had previously written about it. In the final match of the World Cup, the French team in Luzhniki beat Croatia 4-2. The French have become World Cup winners for the second time in history. Bronze won the team of Belgium, which in the match for third place beat England - 2:0.

The Russian national team reached the World Cup 2018 to 1/4 finals, showing the best result in history. In the group stage, the team finished second, defeating Saudi Arabia (5:0) and Egypt (3:1), as well as being defeated by Uruguay (0:3). In the 1/8 final, the Russians beat the Spanish team in a penalty (1:1, in penins 4:3), and in the quarterfinals, also in the 11-meter post-match series, they lost to the future finalists of the tournament - the Croatian national team (2:2, in penalties 3:4).
Source: OREANDA-NEWS
Материалы по теме: