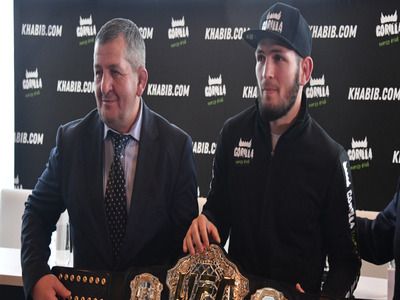 Physical activitySportEventsInternational activities
OREANDA-NEWS. The battle between Khabib Nurmagomedov and Tony Ferguson may take place in the UAE. This was reported to the Russian media by the father of the Dagestan soldier Abdulmanap Nurmagomedov.

The fight between Nurmagomedov and Ferguson is due to take place on April 18 in Brooklyn. However, last week, New York Mayor Bill de Blasio introduced a state of emergency in the city to combat the spread of coronavirus. By this decree, citizens are prohibited from gathering in groups of more than 500 people.

Nurmagomedov Sr. is inclined to the version that if the battle is transferred to another country, it will be the UAE. “Most likely it will be Dubai. Firstly, it’s easier to fight diseases because of the heat. And I think the Emirates will pay for the UFC fight faster and easier”, said Abdulmanap Nurmagomedov, adding that the fight with Ferguson in Russia is excluded.

Nurmagomedov, who has 28 wins in mixed martial arts and not a single defeat, said earlier that he had no information about the possible cancellation or postponement of the battle with Ferguson.

Nurmagomedov spent his last fight against Dustin Porrier in Abu Dhabi. According to the father of the athlete, this emirate has a chance to take a duel with Ferguson. “Abu Dhabi may well be, but then, as Dana White agrees. I can’t approve, but there are more chances there”, he told the media.