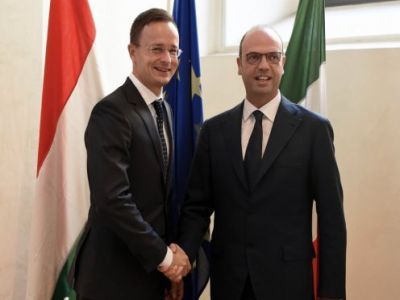 OREANDA-NEWS Minister of Foreign Affairs and Trade Péter Szijjártó held talks with his Italian counterpart on joint action to prevent the persecution of Christians and on the causes of migration in Milan on Thursday.

Reporting on his talks to Hungarian news agency MTI, the Minister highlighted that the parties had agreed that the two countries will be cooperating closely to assist persecuted Christian communities. “The Italian Foreign Ministry includes a section that is closely monitoring the situation of minorities, while Hungary has a deputy state secretariat that is working to investigate and prevent the persecution of Christians, and we have agreed that these two institutions will be working in close cooperation”, he indicated.

Mr. Szijjártó said they had also agreed to closely coordinate their activities in Iraq, where both countries are present and providing partly military and partly humanitarian support, and to realise joint projects in the interest of supporting Christian communities.

“With regard to migration, we agreed that the causes of migration need to be done away with, meaning security and economic development must be guaranteed to all regions and countries that are the greatest sources of illegal immigration”, M. Szijjártó stressed. “The two countries are representing this standpoint jointly, and will be cooperating to ensure the success of programmes launched with this intent”, he declared.

The Minister also mentioned that Italian Foreign Minister Angelino Alfano told him that there may be issues with regard to migration that the two countries view differently, but that he had always appreciated Hungary’s honesty and the fact that it has made its standpoint absolutely clear from the very beginning, while other countries that “formed ranks in voice” in favour of the migration policy declared by the European Union, but hadn’t, or had hardly fulfilled their obligations.

Mr. Szijjártó also told MTI that although Italy is a G7 country and one of the world’s most important economies, “we speak undeservedly little about the fact that Italy is our fifth most significant trade partner”. “Bilaterally trade flow between our two countries increased by 14 percent year-on-year during the first five months of this year, and Italy is now the 7th largest investor in Hungary, with 940 Italian enterprises providing jobs to 14 thousand Hungarians”, he said.

“Italian companies are continually increasing their investments, primarily with the fields of the agriculture industry, the machine industry and renewable energy sources”, he added.