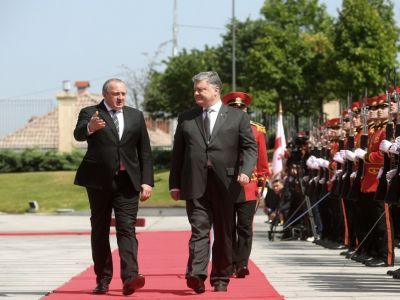 President: Strategic partnership between Ukraine and Georgia has common challenges and threats

OREANDA-NEWS  President: Strategic partnership between Ukraine and Georgia has common challenges and threats
Ukraine and Georgia have many years of relations and today, the two states face the same challenges. Thus, the restoration of relations and establishment of strategic partnership is a strong foundation for the support, trust and friendship between the two nations, as stated by President Petro Poroshenko.

“The threat for our freedom, independence and democracy is the same. We will not let anyone dictate the future for our great nations. This will make us much closer, as Ukrainians firmly believe that they can count on the Georgian people, just as the Georgian people can count on a solid support of Ukrainians! It was so in 2008, it was so in 2013 and it is so now,” the Head of State said in the joint press conference following the bilateral meeting with President of Georgia Giorgi Margvelashvili.

Petro Poroshenko noted that almost every Ukrainian and Georgian have personal pages that reflect friendship between the two nations. It was so in times of Holodomor in Ukraine, it was so in times of the World War II, it is so now when Ukrainians defend their territorial integrity, sovereignty and independence, as stated by the President.

“Now, Ukrainians bow their heads in the memory of their Georgian brothers in arms who came to the Armed Forces of Ukraine in 2014 as they were sure and right that defending our sovereignty and territorial integrity they defend Georgia. It was really touching and these pages are a strong foundation of our friendship and strategic partnership,” the Head of State said.

“And I am grateful for such a level of relations. They form the historic document that we have just signed – the Declaration on the Establishment of Strategic Partnership between Ukraine and Georgia,” he added calling the Declaration the highest form of trust between the governments and nations.

“Strategic partnership is caused by the common challenges and threats. Only united can we overcome these threats. I am very grateful for this partnership, for the system of institutions and mechanisms of constant coordination of our actions, inter alia, in the sphere of defense and security,” the President emphasized.

According to Petro Poroshenko, the parties have discussed the enhancement of this partnership. “There are many ideas on the training of our Armed Forces – in the territory of both Georgia and Ukraine. We are willing to share our victorious experience in the hybrid war,” the Head of State noted. He also reminded the participation of Georgian sailors in Sea Breeze training that is held in the Black Sea under the auspices of NATO. “There were Georgian sailors along with American, British, Norwegian, Romanian, Turkish, Belgian and other sailors. They demonstrate that our partnership is solid, inter alia, in the defense sphere,” the President stressed.

The President of Georgia called the visit of the Ukrainian President to his homeland historic. “This is a man who guides the people of Ukraine in their struggle for freedom. Our freedom is the highest value for us,” Giorgi Margvelashvili said.

He thanked Petro Poroshenko for the state visit and called it an important stimulus for the restoration of relations between the two nations. “You are on the battlefield. You saw things Georgia saw in the 90s, in 2008 – the policy of Russia that brings destabilization and splits the nations. Georgia withstood, although it lost two regions. Now, the same thing is happening with your country. That is why we need the enhancement of our cooperation,” the President of Georgia emphasized.