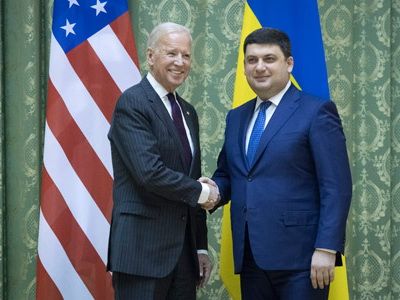 "I want to assure you that my Government and me personally as Prime Minister is never going to stop on the way of changes inside the country. We will continue to go through the reforms that will bring peace, stability and tranquility in our state. We’ll do everything to ensure that Ukraine succeeds and the efforts that have been made led us to success. I know exactly that the changes we make will be the best contribution to the success of our country" Prime Minister of Ukraine Volodymyr Groysman stressed.

"We are the ones who need our reforms, changes and the openness; we are the ones who need an effective fight against corruption. And these not just lofty words this is what will make us strong, Volodymyr Groysman emphasized. - For our part we are committed to the changes in our country by 100%, and we will do everything your contribution, which you did for years, to be a success," PM said.

The Prime Minister thanked for the strong, unwavering position of the U.S. and for personal leadership of Joe Biden in mobilizing international assistance and support for the territorial integrity and sovereignty of Ukraine.

"Your personal role especially in recent years of our struggle for independence is extremely important for our country in all spheres, - Volodymyr Groysman said. I want to thank you for your faith in Ukraine, because Ukraine was and remains in your heart. I know that three days later your attention to our state will not be less than it has been until now".

He noted the efforts of the Administration of President Barack Obama aimed at countering Russian aggression, providing aid to Ukraine - non-lethal weapon, the training of the Ukrainian military, medical assistance to the wounded and expert assistance for internal reforms.

He recalled that the United States had decided to provide loan guarantees of 3 billion dollars, which became a weighty contribution to stabilizing the Ukrainian economy.