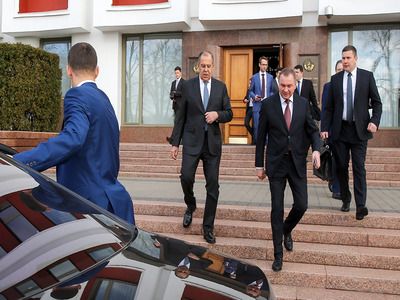 StateMinistries and departmentsOilInternational activities
OREANDA-NEWS. Before the in-depth integration of Russia and Belarus under the Treaty on the Establishment of the Union State, a number of urgent problems need to be resolved, Minister of Foreign Affairs of Belarus Vladimir Makei said in an interview with the Russian media. This is the removal of barriers to the supply of agricultural and industrial products, as well as the settlement of disputes related to gas and oil prices, as well as the tax maneuver being carried out in Russia. According to the Belarusian Ministry of Finance, due to maneuver, the country could lose up to $ 10 billion.

Minsk, according to Makei, is primarily interested in resolving all “these glaring, screaming issues that are on the surface today”. “And of course, I think that if they aren't resolved, then it will be difficult to talk about signing a program of further actions, because we won't understand the logic of our partners”, he said. According to the Russian media, the governments of the two countries plan to create unified Tax and Civil codes, a joint foreign trade regime, as well as an almost unified banking supervision and a single regulator of the oil and gas industry.

The issue of integration within the Union State has been actively discussed since March; in early August, the President of Belarus instructed the government to expedite the coordination of the integration program with Moscow.

Makei admits that by December 8, the signing of the integration map by the presidents of Russia and Belarus Vladimir Putin and Alexander Lukashenko could nevertheless take place.“The presidents agreed to meet on the occasion of the 20th anniversary of the Union Treaty and set the task for the governments of both countries to prepare appropriate roadmaps for resolving relevant issues. Let's hope this happens”, said Mackay.