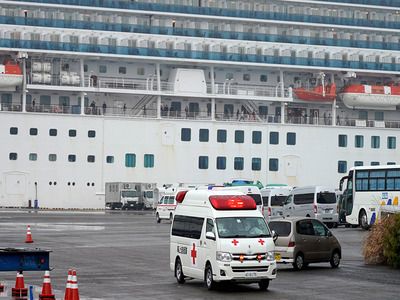 StateMinistries and departmentsWater transport and portsPublic health
OREANDA-NEWS. Russians from the cruise ship Diamond Princess, which is in quarantine off the coast of Japan, will begin to leave the ship on Wednesday, February 19. This was reported to the Russian media at the Russian Embassy in Japan.

The mission added that some of them could immediately fly to their homeland. The representative of the embassy in a conversation with the Russian media added that the diplomatic mission is now working on the details of tomorrow's departure of passengers.

On the eve of the embassy reported that one of the citizens of Russia on the ship was infected with a new type of coronavirus 2019-nCoV. The woman was promised to be delivered to the hospital, where she will undergo a course of treatment.

On February 19, all passengers who didn't have an infection will be evacuated from a cruise ship, said Japanese Minister of Health Katsunobu Kato earlier. According to him, all healthy passengers will leave the ship by February 21. According to Russian diplomats, the Japanese authorities do not plan to extend quarantine on the ship.

Over the past day, according to Japanese authorities, another 88 people have become infected with the 2019-nCoV coronavirus. According to the Russian embassy, there are no Russian citizens among them. In total, there are about 3.7 thousand passengers from 56 countries on board.
Source: OREANDA-NEWS
Материалы по теме:

Czech Republic Will Sharply Tighten Restrictions because of Coronavirus Spread from December 27Oreanda.ru | 23.12.2020 17:28:54

Russian Health Minister Said the Pandemic Will End Only after the Worldwide VaccinationOreanda.ru | 14.12.2020 17:42:03