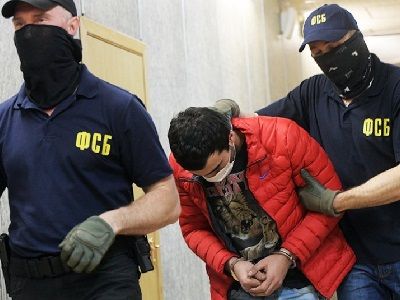 In Moscow Detained ISIS Members, They Prepared a Terrorist Attack

OREANDA-NEWS The Federal Security Service of Russia suppressed in Moscow the activities of the cell of the international terrorist organization "Islamic state" (ISIS, banned in Russia), the participants of which planned resonant terrorist attacks. This was reported in the Center of public relations (DSP) of the FSB of Russia.

"The Federal security service of the Russian Federation together with the Ministry of Internal Affairs of Russia and Rosgvardia of Russia as a result of the carried-out quickly - search actions and investigative actions in the territory of the Moscow region illegal activity of six members of the organized, deeply conspiracy cell of the international terrorist organization "Islamic state" is stopped, - reported in - The leadership of this terrorist cell was carried out by emissaries in the Syrian Arab Republic - immigrants from the Central Asian region."

"The detainees planned to commit resonant terrorist attacks in Moscow with the use of both firearms and improvised explosive devices. In the course of the searches seized automatic firearms, found means of communication with reports on the preparation of terrorist acts, the scheme of manufacture of improvised explosive devices, as well as money", - reported in the FSB.

The special service noted that the cell was provided "through targeted transfers from abroad and through the Commission of serious ordinary crimes." In addition,"members of the group used increased measures of conspiracy to counter law enforcement."

Within the framework of the initiated criminal case, further investigative actions and operational-search activities are carried out to document illegal activities.

In April, four members of the “ISIS sleeper cell” from Novy Urengoy, who were planning a series of high-profile terrorist attacks in the Moscow region, were detained. At the same time, in the course of operational activities, an aiding base of terrorists was identified, as well as their ties from among the radical residents of New Urengoy. During preventive special operation 20 people were detained.