India Launched a Rocket with the First Indian Lunar Rover 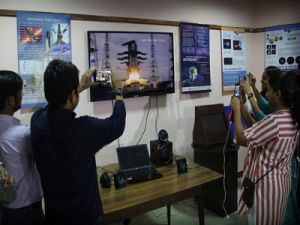 OREANDA-NEWS. The GSLV carrier rocket was successfully launched from the only Indian cosmodrome located on the island of Shriharikot in Andhra Pradesh, which should launch the Chandrayan-2 station (Lunar Ship-2) into orbit. This is stated on the page of the Indian Space Research Organization (ISRO) on Twitter.

In accordance with the mission plan, shortly after takeoff, the Chandrayan-2 separated from the launch vehicle and went into near-earth orbit. From here, he should then head towards the Moon and in August go into orbit around the Earth satellite. The orbiter is expected to continue circling at an altitude of about 100 km above the Moon for a year.

At the same time, the landing module "Vikram" will have to make a soft landing near the South Pole of the Moon and release the first Pragyan ("Wisdom") moon rover on its surface. It's assumed that the rover will be able to work on the moon for two or three weeks, transmitting to Earth information about the chemical composition of the soil and seismic activity data.

In 2008, India launched the Chandrayaan-1 station, which in November of the same year approached the Moon and dropped the MIP (Moon Impact Probe) impact probe on it. The purpose of the "bombing" was to analyze the emission of lunar rocks, to determine the chemical composition of the soil, including in order to search for water ice in the area of ​​the South Pole of the Moon.

In recent times, this isn't the first grand launch. Launch of the Proton-M launch vehicle on July 13 rocket tolerated several times. Initially, it was scheduled for June 21, but then the tests revealed deviations in the work of current sources in the space laboratory. “Spectrum-RG” is a Russian-German project that is to build in the X-ray range a “map of the Universe”, where the largest clusters of galaxies will be marked.