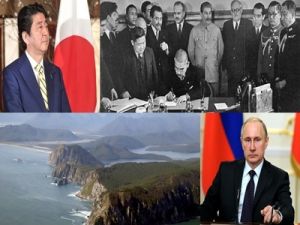 OREANDA-NEWS. The position of Japan on the ownership of the southern Kuriles remains unchanged. This was announced on Tuesday by Japanese Foreign Minister Taro Kono. "The legal position of the Japanese government has not changed," the agency Kyodo quotes Kono.

Earlier, the Japanese Foreign Ministry published an annual report entitled "The Blue Book on Diplomacy." The phrase “we will return the four northern islands to the Japanese side”, which appeared in a similar report for 2018, disappeared from the report for 2019. This year’s Blue Book on Diplomacy stresses that Japan intends to "solve the territorial problem and conclude a peace treaty" with Russia. Local observers believe that the sharp language has been removed from the report for this year in order not to complicate the ongoing negotiations on a peace treaty with Russia.

Last November, at a meeting in Singapore, Russian President Vladimir Putin and Japanese Prime Minister Shinzo Abe agreed to step up negotiations on a peace treaty based on the Soviet-Japanese Joint Declaration of October 19, 1956. Already in December, Putin and Abe agreed to create a solution mechanism on the sidelines of the G20 summit in Buenos Aires. His work is supervised by the Foreign Ministers of the Russian Federation and Japan, Sergey Lavrov and Taro Kono, and their deputies Igor Morgulov and Takeo Mori are directly negotiating.

Earlier, after the last meeting, the head of the Russian Foreign Ministry, Sergei Lavrov, summing up the bilateral talks, said that the views on the solution of the peace treaty issue between the countries are absolutely opposite. According to him, the main condition for the conclusion of a peace treaty between the countries of Russia is the recognition by Japan of the full sovereignty of Russia over the Kuril Islands and this is the "basic position" of Russia, which is "not negotiable."