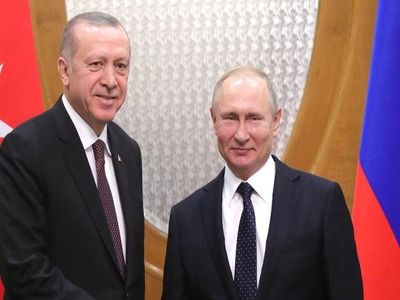 Kremlin Called the Topics of Upcoming Talks Between Putin and Erdogan

StateInterstate relationsEventsMinistries and departments
OREANDA-NEWS. Russian President Vladimir Putin at the upcoming talks with Turkish leader Recep Tayyip Erdogan will discuss the situation in Syria against the background of the Turkish military operation "Source of Peace". This was announced to journalists by the Kremlin’s press secretary Dmitry Peskov, a Russian media correspondent reports.

"The situation in eastern Syria is tense in connection with this operation", Source of Peace. " She will be on the agenda of the discussion at the meeting”, he stressed. Peskov recalled that earlier the UN expressed concern about the humanitarian situation in Syria and the flow of refugees. Putin also expressed concern over a telephone conversation with Erdogan. “Our position is well known, it has not changed”, the spokesman for the Russian president concluded.

On October 9 Turkey launched the military operation "Source of Peace" in the north-east of Syria, its goal was the Kurdish "National Self-Defense Forces" and "Syrian Democratic Forces", which the Turkish side considers terrorist. Washington refused to support Ankara.
Source: OREANDA-NEWS
Материалы по теме: