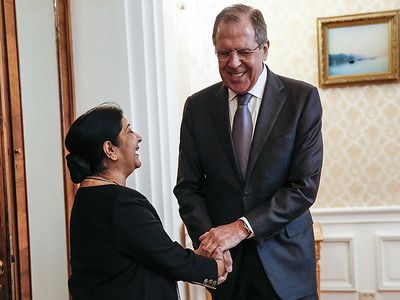 Lavrov: Russia Hopes for Expansion of Military-Technical Cooperation with India Following the Forum in Vladivostok

StateInternational activitiesMilitary securityMinistries and departments
OREANDA-NEWS. Moscow expects to expand cooperation with New Delhi in the military-technical sphere following the results of the Eastern Economic Forum in Vladivostok. This was announced on Wednesday by Russian Foreign Minister Sergei Lavrov at a meeting with Indian Foreign Minister Subramaniyam Jayshankar.

“I hope that today we will talk about how to make the most effective use of the upcoming WEF summit, including promoting a political dialogue in the spirit of our particularly privileged strategic partnership, including expanding trade and economic cooperation, including in the field of high technology, military-technical cooperation and, of course, coordination of our actions in the international arena, in the UN and other associations", he said.

In turn, the Foreign Minister of India emphasized that the negotiations will be very important for the preparation of the annual summit between the leaders of the two countries in Vladivostok. "Russian-Indian bilateral relations cover various areas and are developing very successfully. We are faced with the task of raising them to an even higher level", said Jayshankar.

The head of the Indian Foreign Ministry also expressed hope for a "frank, positive and constructive discussion of pressing international and regional problems". He emphasized that he was especially glad to visit Moscow again shortly after his appointment to the ministerial post, since he began his diplomatic career in Moscow.

The V Eastern Economic Forum will be held in Vladivostok on September 4-6. Its organizer is the Roscongress Foundation. The Russian media is the general information partner, the official photo hosting agency and the moderator of the presentation of innovative opportunities for the Far East.