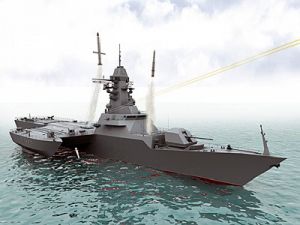 The organizers equipped a large-scale exposition at Lenexpo.  The total area of ​​the exhibition is 15 thousand square meters.  Russian design offices and enterprises presented their latest developments.  Among them, the first domestic submarine with a single air-independent power plant.  With its help, the submarine is capable of making both surface and underwater movement without rising to the surface for more than two weeks.

They showed the ship "Sagaris".  It is intended for water rides and service and traveling purposes.  It can also be used to perform patrol and police functions, deliver special groups to disaster areas and evacuate victims, as well as to provide emergency assistance to victims in emergencies.

More than 30 ships of the Russian Navy will be presented at the berths of the Morsky Train Station.  In particular, the frigate "Admiral Kasatonov", the Corvette "Resistant", small missile ships "Mytishchi" and "Serpukhov".  You can also see landing boats "Michman Lermontov" and "Eugene Kocheshkov."