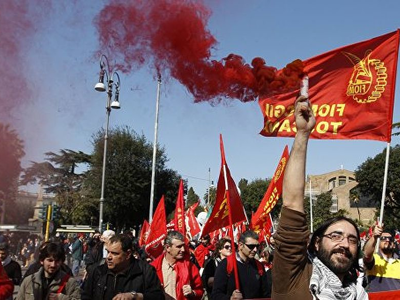 Aviation Workers are on Strike in Italy

PoliticsWorldEvents
OREANDA-NEWS On the morning of July 26, a strike was launched by employees of airlines and other aviation services, in particular, air traffic control personnel. The protest will last 4 hours - from 10 to 14 hours local time. This is the first general strike in the history of the Italian trade unions of air transport workers.

Many flights were canceled due to the strike, others were delayed. Alitalia has canceled 113 flights, mainly for local traffic.

The organizers of the strike - trade unions - require the authorities to adopt a transport strategy, which is currently completely absent, which threatens the entire industry. In addition, protesters demand that they fight dumping, stimulate competition, and adopt a revitalization plan for Alitalia.