Chinese Official Assessed the Impact of the Coronavirus Epidemic on Economic Development
State, 24.02.2020, 13:53 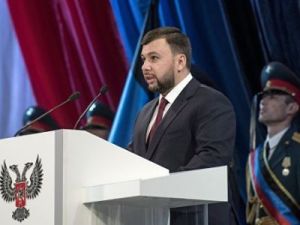 OREANDA-NEWS. Denis Pushilin, the head of the self-proclaimed Donetsk People's Republic (DPR), said that the main goal of Donbass (the collective name of Donetsk and Luhansk republics) is “returning to its homeland as a full member”.

He noted that Ukraine brings to the residents of the region only “artillery shells, destruction, the masses of the killed men and the blockade”, and for this reason the Donbass is actively moving towards its Eastern neighbour. “We cannot identify ourselves as no one but Russians. We all are Russians”, the head of the DPR accented.

Integration process is in the intensive phase, “we‘d like to go faster”, Pushilin said, “but we understand there are geopolitical implications, and we know our path is harder and thornier (than Crimea’s), yet the goal is clear and we’re getting there”. The Donbass is reviving its economy, although it is rather difficult being non-recognized, but the population of the region does not despair, and “Russia helps us opening its markets for us”, Pushilin added.

As for the Russian authorities, in December 2018, Foreign Minister of the Russian Federation Sergey Lavrov said that the Kremlin cannot recognize Luhansk and Donetsk republics, because it would suspend relations with the rest of Ukraine. Russian politician noted that the Kiev regime has all the features to be considered a neo-nazi regime, but the Donbass people are fighting with it, the overwhelming majority of Ukrainians wants to get rid of that “shameful regime” and return to normal relations with Russia.