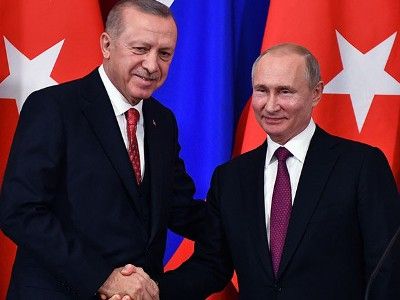 Erdogan Explained to Putin the Tasks of Military Operation in Syria

OREANDA-NEWS. The President of Turkey Recep Tayyip Erdogan at the talks with his Russian counterpart Vladimir Putin explained the objectives of the military operation in the north-east of Syria.

“Mr. Erdogan gave a detailed explanation of the goals and objectives of the operation. […] We have often noticed that we treat the steps of Turkey with understanding,” the Russian president said at a press conference.

“We touched on everything related to operation Peace Spring. The main task is the destruction of the PKK and the YPG (the Kurdistan Workers’ Party and the People’s Protection Units. – Ed.) and the ensuring of the return of Syrian refugees,” Erdogan said after the talks.

The Russian leader noted that the meeting in Sochi made it possible to reach “determining decisions” on the detente in Syria. “It was possible to reach decisions that will be voiced by the foreign ministers. They will be important,” Putin stated.

According to Russian leader, Moscow shares the concern of Ankara about the intensification of terrorism and ethno-confessional contradictions in Syria, which were “artificially fueled by outsiders.” “We consider it necessary to help Syrian refugees to return to their homeland, it will significantly reduce the socio-economic burden that the countries that have agreed to accept the Syrians bear,” Putin concluded.

“We signed a specific agreement. Thanks to this document, we will not allow separatist formations to be created in Syrian territory. Starting tomorrow we will carry out our project. In 150 hours, they (Kurdish armed groups. – Ed.) will be moved away to a distance of 30 kilometers,” the Turkish president resumed.