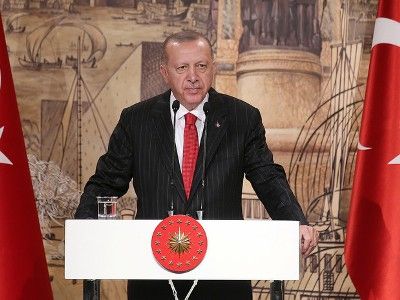 OREANDA-NEWS. Turkish President Recep Tayyip Erdogan said that the meeting with Russian leader Vladimir Putin would be the next phase of creating a security zone in Syria. According to Erdogan, if the truce is successful, he will go to meet with Putin.

Turkish leader recalled that Ankara agreed to suspend the military operation in northern Syria for 120 hours. During this period, the Kurdish People’s Defense Units will have to leave the territories that are considered in Ankara as a security zone. “Our security forces will not leave this area,” he added.

According to the politician, he perceives the meeting with Putin as a “next phase of this process (Creating a security zone. – Ed.).” The meeting of the two presidents is scheduled for October 22. Earlier, the Kremlin reported that the topic of negotiations in Sochi will be the situation in eastern Syria, which has escalated against the background of the Turkish operation Peace Spring. The Turkish authorities called the aims of operation – the ousting of the Defense Units, which they consider to be terrorist, from the northern regions of Syria, and the creation of a 30-kilometer security zone along the Turkish-Syrian border.

Damascus called the actions of Ankara an aggression. The operation was also criticized by several European countries and the Arab League. The USA imposed sanctions against the Turkish Ministry of National Defense and the Ministry of Energy and Natural Resources.

On October 17, US Vice President Mike Pence at a joint press conference with Erdogan announced the suspension of the operation. Under the agreement, during this time, the Kurds must leave the 30-kilometer zone, and then Turkey will complete the operation.

On the morning of October 18, media reported that fighting started near city of Ras al-Ayn. The representatives of the Syrian Democratic Forces accused the Turkish units of attacking settlements on Syrian territory and announced the breakdown of the ceasefire. Erdogan called it disinformation and said the ceasefire agreement is still in effect.