Putin Is Not on "Social-distancing" Anymore 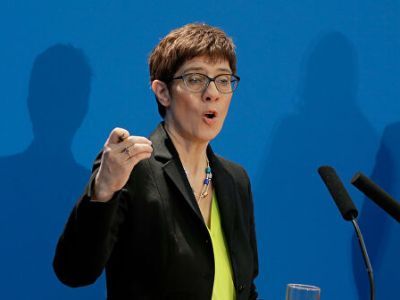 OREANDA-NEWS. Annegret Kramp-Karrenbauer, the Minister of Defense of the Federal Republic of Germany, is going to offer to NATO to create a security zone in Syria on the border with Turkey, which will be controlled by international forces with the participation of Moscow and Ankara.

According to the politician, the situation in Syria negatively affects the interests of Europe and, in particular, the FRG with regard to security. The Minister noted that so far the actions of Berlin and Brussels have been too passive; therefore, the political initiative of Germany is reasonable.

So, Kramp-Karrenbauer proposed “to create a security zone controlled by international forces with the involvement of Turkey and Russia to deescalate the situation, as well as to continue the fight against terror of the Islamic State terrorist organization and the real continuation of the constitutional process (In Syria. – Ed.), which has just begun.”

According to the Minister of Defense, she has already agreed on her proposal with German Federal Chancellor Angela Merkel, and this offer will be presented at a meeting of NATO defense ministers to be held in Brussels on October 24 and 25.

Since October 9, Turkey has been carrying out military operation Peace Spring in northeast Syria against Kurdish formations. On October 17, the United States and Turkey agreed to suspend this operation for 120 hours and to withdraw Kurdish forces from the 30 kilometer buffer zone on the border between Turkey and Syria, which Ankara intends to control independently. Syrian authorities condemned the occupation policy of Turkey.