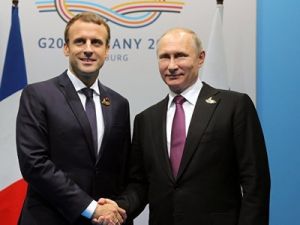 OREANDA-NEWS. French President Emmanuel Macron will arrive in Moscow on May 9, 2020 for the anniversary of Victory.  According to the Kremlin’s press service, during a telephone conversation on Thursday, the French leader accepted an invitation from his Russian counterpart Vladimir Putin to attend the celebrations.

The heads of the two states held telephone calls on Thursday, July 18.  The conversation took place on the initiative of the French side.

The parties also discussed the situation around the Iranian nuclear program, the Syrian settlement, the situation in the Donbas, outlined a schedule of upcoming contacts.  In addition, the presidents expressed willingness to intensify joint work in the framework of the "Norman format."

In late June, US President Donald Trump announced that he would seriously consider inviting the Russian leader to celebrate the 75th anniversary of the Victory.