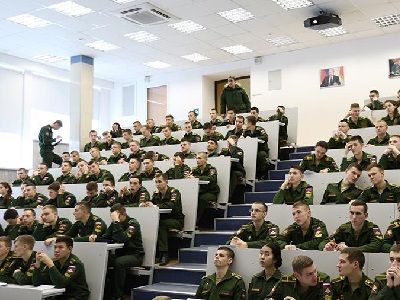 Military-Political Academy will be Opened in Russia in 2019

OREANDA-NEWS Until the end of 2019 in Russia will be revived one of the most prestigious educational institutions of the Soviet army — the Military-Political Academy (WPA), before its reorganization in the 1990s bore the name of Vladimir Lenin. According to sources of in the Ministry of Defense, the Academy will be opened on the basis of the Military University, which now trains officers in humanitarian specialties. The updated Military-Political Academy will produce Deputy commanders for military and political work, psychologists and journalists.

With the initiative to revive the Military-political name of Academy Lenin spoke recently created the Main military and political Directorate of the armed forces. Military-Political Academy traces its history back to 1919, when the Teacher's Institute of the red army was established. In Soviet times, this Academy was considered one of the most prestigious in the country: to enter here received the right political officers at the level of Deputy commander of the battalion and above. After graduation, they could hold senior positions in the military-political structure of the Armed forces up to the Deputy defense Minister.

The successor of this institution was the Military University, which on November, 5 this year should celebrate its centenary. As told "news" several sources in the Ministry of defense, on the eve of the anniversary in the Department has already made a fundamental decision on the revival of the Military-Political Academy. Now two options are considered: renaming with the adjustment of training programs or division into Military-political Academy and several specialized military institutions. In the latter case, students of philological, legal and economic specialties will study separately.