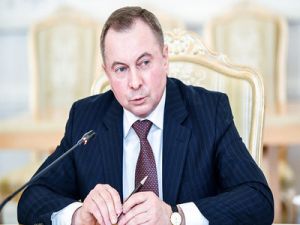 OREANDA-NEWS. Belarus Foreign Minister Vladimir Makei said that Minsk could refuse to create a Union State with Russia if the society considers the relevant agreement inappropriate. It's reported by the Belarusian media.

“If the society considers the existence of an agreement inappropriate, the society can raise a question and put it before the leadership of the state”, he said. As Makey pointed out, the country's leadership takes into account the relevant opinion. The minister explained that the procedures allow submitting questions to referenda through appeals. At the same time, according to Makei, all polls indicate that most citizens speak out for close relations with Russia.

Earlier it was reported that Belarus and Russia should agree on all integration roadmaps by sector of economy by November, said Prime Minister of Belarus Sergei Rumas. He also explained that equal business conditions provide for “equal taxation and elements of budget policy.