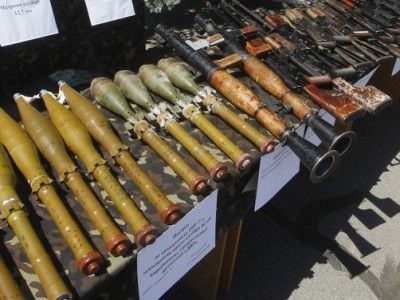 OREANDA-NEWS. Nicu Popescu, the Minister of Foreign Affairs and European Intagration of the Republic of Moldova, reported in an interview with the Romanian television channel TVR that the authorities of the country may soon send to Russia about 20 thousand tons of ammunition confiscated in the region of Transdniestria. The transit of cargo to Russia will be through the territory of Ukraine, as the diplomat said. Popescu stated that he had discussed this topic with all partners.

He also recalled that the ammunition disposal process was suspended by Russia in 2003. “We would like to have normal, calm, stable relations with the Russian Federation. One of the very important topics that we discussed in Moscow was the matter that the Russian Federation again undertakes an obligation to resume the destruction of ammunition stored in the region of Transdniestria,” the politician said. According to him, Chisinau would like to see the destruction of ammunition as soon as possible. It was reported about the agreement on this matter in August 2019.

Moldovian Foreign Minister said that the process of confiscation of ammunition in Transdniestria was controlled by the Organization for Security and Cooperation in Europe. However, only Russia has a complete list of everything confiscated, he said. “For our part, it is very important that any destruction and transit be carried out under international control. We discussed this topic with all the states of the European Union,” Popescu added.

Ammunition depots remained in Transdniestria after the dissolution of the Soviet Union in 1991. The depots are guarded by the special group of the Russian troops deployed in the region since 1995.