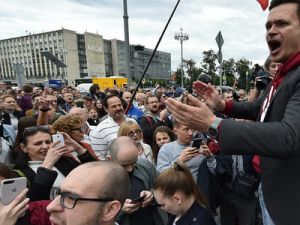 OREANDA-NEWS Metropolitan police detained more than 25 people at an unauthorized protest outside the Moscow City Election Committee building on Mokhovaya Street in central Moscow, the press service of the State Ministry of Internal Affairs in Moscow said.

At present, the detainees are brought to the territorial police departments for investigation.

According to the police, about 1,000 participants gathered for an unauthorized rally in support of independent candidates for elections to the Moscow City Duma. Its organizers announced plans to make the action near the Moscow Election Committee building indefinite.