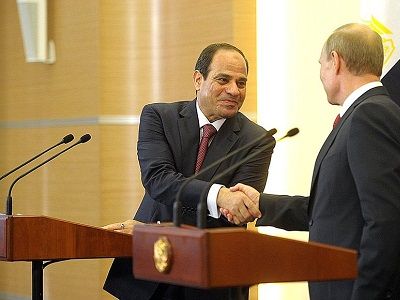 Putin and Al-Sisi Discussed the Resumption of Direct Flights

OREANDA-NEWS   Moscow and Cairo will seek to resume in the near future Charter flights between Russian cities and Egyptian resorts. This was stated by Russian President Vladimir Putin after talks with Egyptian President Abdel Fattah Al-Sisi.

The Russian leader recalled that in April, direct regular flights between Moscow and Cairo were resumed, and today the issue of restoring full-scale air links between the two countries, including Charter flights to popular Russian tourists Hurghada and Sharm El-Sheikh, was discussed at the talks. Putin noted that the Egyptian side is doing "everything necessary to increase the level of safety" of flights.

"We will strive to resume Charter flights on these routes in the near future," the Russian President said.

Air traffic between the two countries was stopped in November 2015 years after the crash over Sinai Russian airline "Kogalymavia", flying from Sharm El-Sheikh in St. Petersburg. On Board were 217 passengers and seven crew members, all of them died. The FSB qualified the incident as a terrorist attack.

In January 2018, Putin signed a decree to resume regular air traffic to Cairo. The first flight from Moscow took place on April 11. Still remains closed Charter flights with the Egyptian cities of Sharm El-Sheikh and Hurghada.

In addition, Putin said that the talks with Al-Sisi thoroughly discussed the prospects of military-technical cooperation between the two countries.

"We discussed in detail the prospects for military-technical cooperation, military cooperation is no less important," Putin said in a statement to the press following the talks. As the President noted, Russia and Egypt "have been successfully cooperating in these areas for decades." He also reminded that these days joint tactical exercises of airborne troops of the two countries are held on Egyptian territory.

Putin also announced Moscow's support for the idea of creating a free trade zone between Egypt and the Eurasian Economic Union.

"Our country supports the desire of Egypt to conclude an agreement on a free trade zone with the Eurasian Economic Union," the politician said. He is confident that "this will open up additional opportunities for increasing economic cooperation and trade turnover."

The Eurasian Economic Union includes Russia, Armenia, Belarus, Kazakhstan, Kyrgyzstan. A free trade zone agreement has been signed with Vietnam and a temporary agreement with Iran. In addition to Egypt, several other countries are negotiating the establishment of a free trade zone.