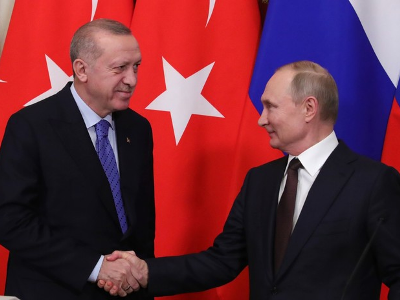 Putin and Erdogan Discussed the Situation in Idlib

OREANDA-NEWS. Presidents of Russia and Turkey Vladimir Putin and Recep Tayyip Erdogan held a telephone conversation during which they discussed issues of the Syrian settlement, including the situation in the governorate of Idlib.

“The substantive exchange of views on the issues of the Syrian settlement, including the implementation of the Russian–Turkish agreements of March 5, 2020 to stabilize the situation in the Idlib zone, continued. Libyan issues were also discussed,” the Kremlin’s press service reported.

In addition, the politicians spoke about COVID-19 outbreak. “The situation in connection with the spread of the coronavirus pandemic was examined. The heads of state informed each other about measures taken to combat this infection. Particular attention was paid to cooperation in ensuring the return of Russian citizens, who are in Turkey, to their homeland,” the statement of the press service says.