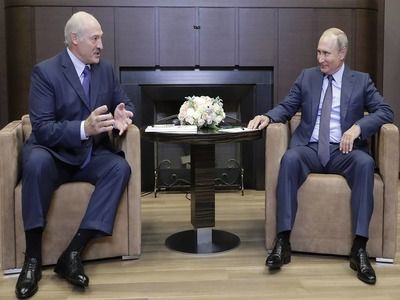 PoliticsInternational activitiesEventsTerritorial administration
OREANDA-NEWS. Presidents of Russia and Belarus Vladimir Putin and Alexander Lukashenko are negotiating in Sochi. The presidents began a one-on-one conversation, later delegations will join them. As previously reported, the parties intend to discuss topical issues of Russian-Belarusian cooperation, including in the context of integration processes within the Union State.

The footage of the meeting, which takes place in one of the complexes in the mountains in Sochi, was later shown by the Russia-24 television channel. The Russian leader met his guest on the street, going to him in a red sports winter jacket. On the porch they warmly greeted each other, talked about the weather.

“And you are lucky, the sea is snowing here”, Lukashenko told Putin at the meeting. “Yes, it's good here”, the Russian leader replied. The President of Belarus told his colleague that where he stayed in Sochi, "there was almost no snow, but here below - there was a lot of snow". “And there’s even more”, Putin said, pointing Lukashenko to one of the mountain peaks. Then the leaders of the two countries went into the negotiation room, where their conversation began in a format without ties.
Source: OREANDA-NEWS
Материалы по теме: