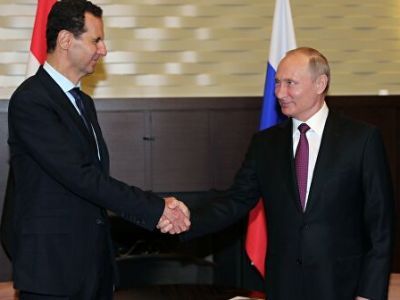 OREANDA-NEWS. Russian President Vladimir Putin paid a visit to Damascus, where he held talks with his Syrian counterpart Bashar al-Assad.

After landing at the Syrian airport, Putin went to the command post of a group of the Armed Forces of Russia, where al-Assad met him. “The heads of the two states heard military reports on the situation in various regions of the country,” the Kremlin Spokesman Dmitry Peskov said. According to him, Russian leader noted that it is safe to say that a great distance had been passed towards restoring Syrian statehood and the country’s territorial integrity. The politician said that “the signs of a restored peaceful life” can be seen on the streets of Damascus.

Assad thanked Putin and the Russian military for their assistance in the fight against terrorism, and congratulated the President and all Russians on Christmas.