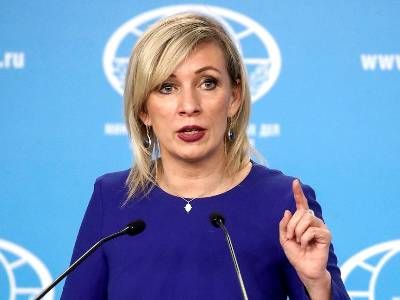 OREANDA-NEWS. During the current week, the Russian Ministry of Foreign Affairs returned to Ukraine two notes of protest, which were sent by Kiev. This was announced during a briefing by the official representative of the Russian diplomatic agency, Maria Zakharova.

“This week, the Russian Ministry of Foreign Affairs returned two notes to colleagues, namely the Ukrainian Foreign Ministry. In the first, Kiev protested in connection with archaeological excavations and earthworks in the Crimea. In the second, it demanded a report on measures taken by Russia in the fight against coronavirus in the Crimea and Donbass,” she said.

According to Zakharova, “at a time when a pandemic is raging in the country, and fires are raging in Chernobyl,” when Russian planes are transporting Ukrainian citizens from third countries, the Ukrainian Foreign Ministry is sending all its forces to “bombard” Russia with “formidable notes of protest.” “All these papers, malicious notes, will be returned to the Ukrainian side due to the lack of grounds for their consideration,” the diplomat concluded.