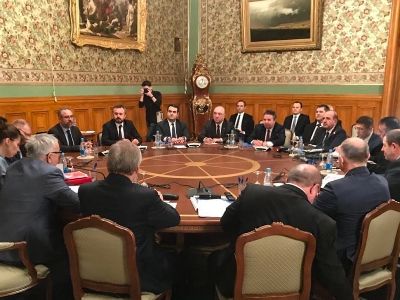 Russian and Turkish Delegations Discussed the Situation in Idlib

OREANDA-NEWS. In Moscow, negotiations on the situation in Syria were held between the Russian and Turkish delegations. This was reported on Twitter page of the Ministry of Foreign Affairs of Turkey. Deputy Foreign Minister of Turkey Sedat Onal, Deputy Foreign Minister of Russia Sergey Vershinin and Special Representative of the President of Russia for the Syrian settlement Alexander Lavrentyev took part in the meeting.

Haberler portal, citing Turkish Foreign Ministry spokesman Hami Aksoy, reports that the topic of the talks was the situation in Syrian governorate of Idlib. The parties discussed possible measures for the full implementation of the agreements reached in Sochi and the prevention of their violations. On the morning of February 18, negotiations will resume.

The newspaper Sozcu, citing a statement by the Turkish Foreign Ministry, writes that during the talks, the Turkish side stated the need to reduce tensions as soon as possible and prevent a further deterioration in the humanitarian sphere.