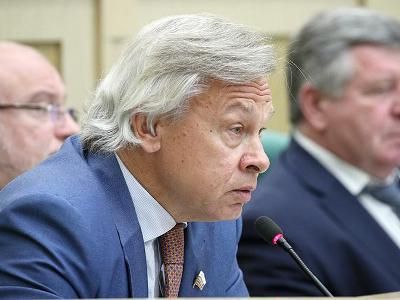 Russian Senator Predicts the Loss of Hegemony by the United States

OREANDA-NEWS. Aleksey Pushkov, a member of the Federation Council of Russia, considers that the loss of world hegemony by the United States of America is inevitable. According to him, the “triangle of countries” consisting of Russia, China and the USA will replace it.

In an interview with Parlamentskaya Gazeta, Pushkov explained that American influence has been weakening for past 20 years, and the epidemic of COVID-19 “just makes this process more prominent.” “A state that has really huge financial resources, where health care is well developed, turned to be powerless before the epidemic,” the politician said.

The senator recalled that nowadays China and Russia are at the forefront of helping other countries, while the United States “acts as an extremely selfish power.” In particular, Washington does not abandon the policy of sanctions, despite calls by the UN Secretary-General.

Pushkov also noted that the key changes associated with the fall in US hegemony will occur over the next ten years.
Source: OREANDA-NEWS
Материалы по теме: