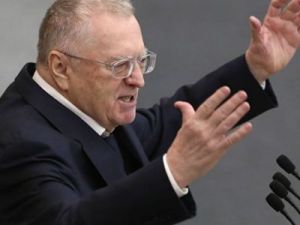 OREANDA-NEWS. Vladimir Zhirinovsky, the State Duma deputy, the leader of Liberal Democratic Party of Russia (a socially conservative, nationalist, economically interventionist political party), believes that the President of Ukraine, Vladimir Zelensky, will rule the country for no more than 2 years, and after that there will be a new “bloody Maidan” (Maidan Nezalezhnosti, Independence Square, central square of Kiev, which became a symbol of civil unrest and revolution). He wrote about this in his Telegram channel.

The politician compared the nowadays situation in Ukraine with the “terminal cancer”, and stated that the “metastases” have already spread throughout the country.

“The whole country is bleeding, there is no economy, and people are going away. Zelensky can be a president of such Ukraine for a year or two, and then he will be swept away. There are thousands and thousands of armed people, “pro-Ukrainian” nationalists, who have already smelled of blood. They don’t need peace, they want to plunder and kill. After the Second World War the KGB and the Soviet army were hunting such guys in the forests for 10 years. Now they can bring their own Pinochet to power in Ukraine. Then, they will sweep him away too. It will lead to the division of Ukraine at first, and after that to the return of all Ukraine to Russia”, – wrote Zhirinovsky.

The  statement of Zhirinovsky is connected with the elections to the Verkhovna Rada of Ukraine. After processing 91 % of protocols, the party “Servant of the People” leaded by the President Volodymyr Zelensky got 43.11 % of votes. The “Opposition Platform – For Life” of Viktor Medvedchuk got 13 %, the all-Ukrainian union “Fatherland” of Yulia Tymoshenko got 8.17 %. So, Zelensky and his team can form a government without a coalition for the first time in the country’s history.