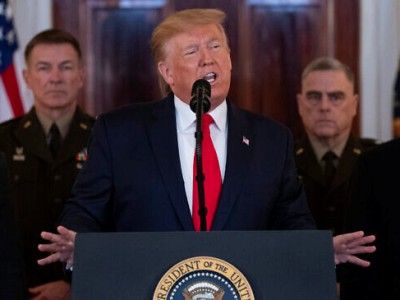 OREANDA-NEWS. US President Donald Trump announced new sanctions against Iran in an appeal to the nation.

He said that no one was injured during Iran’s attack on American military facilities and called the damage minimal. Iran previously claimed the death of 80 people.

US authorities are still considering how to respond to Iran’s attack. According to Trump, Washington will impose new economic sanctions. He emphasized that additional severe sanctions against the Iranian regime will remain in force until Tehran changes its behavior.

American leader also called on European countries to break away from the collapse of Iran nuclear deal. “Iran must abandon its nuclear ambitions and end its support for terrorism,” he stated. “The time has come for the United Kingdom, Germany, France, Russia and China to recognise this reality,” Trump concluded.
Source: OREANDA-NEWS
Материалы по теме: