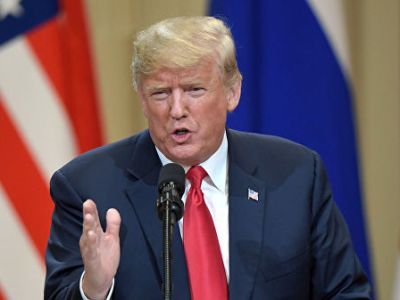 OREANDA-NEWS. USA President Donald Trump threatened China that if prior to his possible re-election in 2020, an agreement on trade with Beijing will not be concluded, or the terms of the deal will be tougher.

On his Twitter page, Trump complained that the Chinese in the negotiations “always change the deal in the end to their benefit.” The President wrote: “They should probably wait out our Election to see if we get one of the Democrat stiffs like Sleepy Joe (Joe Biden, the representative of the Democratic Party. – Ed.).”

“The problem with them waiting, however, is that if & when I win, the deal that they get will be much tougher than what we are negotiating now… or no deal at all. We have all the cards, our past leaders never got it!” Trump wrote.

On July 30 in China, the next round of trade negotiations between Beijing and Washington starts. The last round of the US and China trade negotiations ended in mid-May without any results, amid one more increase in US duties on Chinese goods. The United States raised duties on Chinese imports amounting to about 200 billion dollars from 10 % to 25 %. Trump also ordered to begin the process of increasing duties on all remaining imports from China, amounting about 300 billion dollars. In response, the Chinese Ministry of Finance reported that Beijing, from June 1, imposed increased duties on imports of goods from the United States in the amount of 60 billion dollars.

Earlier Trump met with Chinese President Xi Jinping on the summit in Osaka. American leader declared that the White House was ready to discuss a mutually acceptable trade agreement.