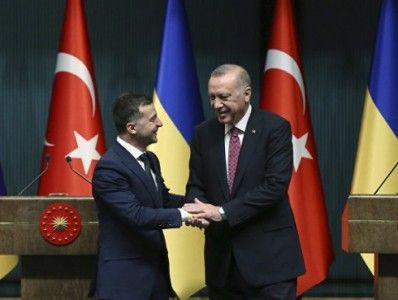 Turkey and Ukraine Signed an Agreement on Military and Financial Cooperation

OREANDA-NEWS. The Minister of Defense of Ukraine Andriy Zahorodniuk and the Minister of Treasury and Finance of Turkey Berat Albayrak during the visit of Turkish President Recep Tayyip Erdogan to Kiev signed an intergovernmental agreement on military and financial cooperation.

“Today an important agreement was signed on military and financial cooperation, according to which the Ukrainian army will receive financial assistance from Turkish partners,” Ukrainian President Volodymyr Zelensky said.

The press service of Zelensky’s office said that Ankara will give Kiev 33 million US dollars for the purchase of military equipment. “The documents provide for the allocation by the Turkish party of 200 million Turkish liras… for the needs of the Ukrainian Armed Forces for the acquisition of Turkish military and dual-use goods,” the message published on the website of the head of state says.

Russian Government Approved a Loan of 1 Billion Dollars to Belarus