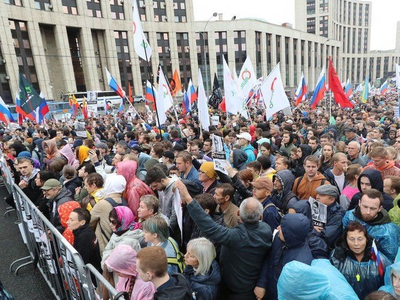 Two Applications for a Rally on August 31 Filed in Moscow

StatePoliticsSurvey research
OREANDA-NEWS Copies of the notices are posted on Twitter by politician Dmitry Gudkov, who is currently serving an administrative arrest. In one application, Peace Avenue is indicated as the venue, and in another one - Academician Sakharov Avenue.

Earlier, City Hall rejected four applications for rallies and a procession this Saturday. Authorities offered to transfer the shares to Maryino, but the organizers refused.

Instead, on August 24, a concert will be held on Sakharov Avenue in honor of Russian Flag Day. Another controversy arose around the stock this Sunday. The Libertarian Party intended to hold a rally and a procession in the center of Moscow, but refused it after the city authorities allowed only one rally.