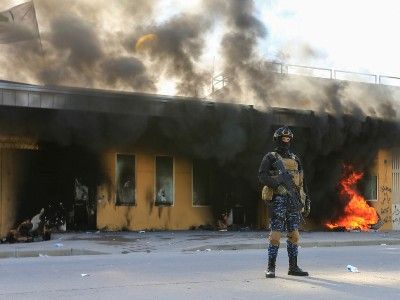 US Accuses Russia and China of Blocking UN Statement

OREANDA-NEWS. Reuters news agency reported that the United States accused Russia and China of intentional blocking the United Nations Security Council statement “underscoring the inviolability of diplomatic and consular premises” after the attack on the US Embassy in Baghdad on December 31.

The US mission to the UN noted that 27 countries opposed the attack on the US Embassy in Iraq “in stark to the United Nations Security Council’s silence due to two permanent members – Russia and China – not allowing a statement to proceed.”

The first riots near the US Embassy in Baghdad began on December 31 due to US air strikes on the positions of the Shiite group Kata’ib Hezbollah. As it was reported by the Shiite militia, during the attack in the Iraqi town of Al-Qa’im, 25 people were killed and more than 50 were wounded. More than 20 people were injured during clashes with the police near the embassy. The Pentagon sent additional 750 soldiers to the region to guard embassy personnel. US authorities, including President Donald Trump, accused Iran of organizing riots.
Source: OREANDA-NEWS
Подписывайтесь на наши группы: Instagram | VK | Facebook | Twitter
Материалы по теме: